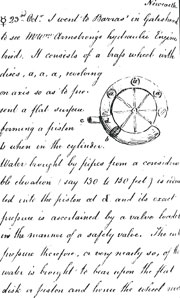 The largely unpublished diaries of Thomas Sopwith (of which a page from 1839 is shown above) provide a matchless record of William Armstrong's early life, his marriage to Margaret Ramshaw, and his rise to national and international fame. They also contain accounts of Armstrong's transformation of Jesmond Dene and his building and planting at Cragside. 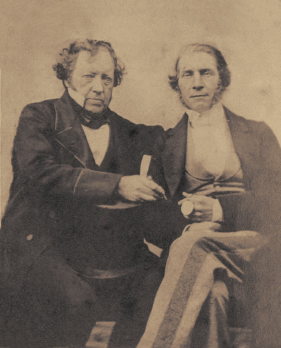 Thomas Sopwith's friendship with Armstrong was crucial in bringing the inventor to national prominence and helping him to get his business at Elswick off to a promising start.

Sopwith was born in Newcastle in 1803, seven years before Armstrong, and was apprenticed early in life to his father, a cabinet-maker in Pilgrim Street. But he carved out a highly successful career as a land-surveyor and engineer, becoming in 1845 chief manager of the Beaumont lead mines at Allenheads in the North Pennines. He was also a talented geologist who helped to set up a national Mining Records Office.

Sopwith numbered among his friends most of the leading engineers and scientists of the day, including George and Robert Stephenson, Isambard Kingdom Brunel, Michael Faraday, William Buckland, Adam Sedgwick, Charles Babbage and Roderick Murchison, as well as architects such as Charles Barry and Decimus Burton. His many other interests included astronomy, meteorology and organ-playing. He was a Fellow of the Royal Society and a member of 26 learned societies, including the Literary and Philosophical Society of Newcastle upon Tyne.

Starting in 1822 and continuing until his death 57 years later, Thomas Sopwith kept a journal written in beautiful copperplate, which survives today as 168 leather-bound volumes containing records of all the important scientific developments of the day, as well as Sopwith's observations about his personal life and the activities of his friends and neighbours.

The photograph above was pasted into Sopwith's diary for 1856. It shows the diarist with his friend William Armstrong, who seems to be displaying a medal. This is probably the Telford Medal, which Armstrong was awarded in 1850 in recognition of his work on water-pressure engines. Sopwith has a top hat on his knees and is holding what is believed to be a gold pencil that he kept as a memento of the occasion when Armstrong made one of his great electrical discoveries.

'It was my good fortune to know Armstrong when he was wholly occupied, as regards professional avocations, with the law,' wrote Sopwith in his diary for October 1876. 'I witnessed some of his early experiments with hydraulic apparatus and actively assisted in the publication of his researches. I accompanied him on the first occasion of his seeing electricity developed from steam, and I wear daily in my pocket a gold pencil bearing the name of the only other person present on that occasion, namely the late William Daniel Anderson.'