Constructed in the 1870s to replace a low-arched stone bridge, the Swing Bridge was designed to revolve on its axis to allow the largest ships of the time to pass through and steam upriver. The foundation work was carried out by the Tyne Commissioners, and the wrought-iron superstructure and hydraulic operating machinery were both supplied by Armstrong's Elswick Works. It gave Armstrong a gateway to the sea – the prelude to opening a shipyard at Elswick. 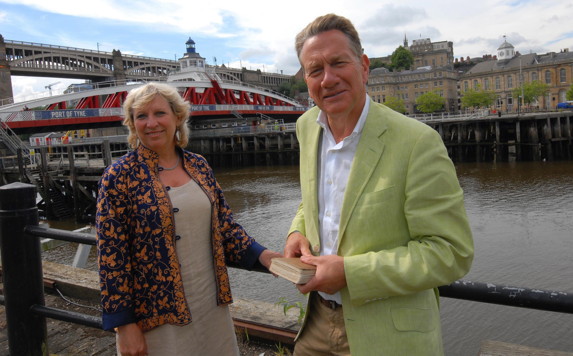 The hugely popular BBC television series Great British Railway Journeys, presented by Michael Portillo, has visited Newcastle upon Tyne for the first time in five years. The subject of interest on this occasion was William Armstrong, the Victorian inventor, engineer and industrialist who built the Swing Bridge across the Tyne. The Armstrong programme was first broadcast on BBC2 on Friday, 23 January 2015. It demonstrated that the hydraulically operated Swing Bridge still works perfectly more than 140 years after its creation.

Occupying virtually the same site as the bridge built in AD120 by the Roman emperor Hadrian, the 560-foot-long Swing Bridge has three piers of solid masonry set into cast-iron cylinders sunk to a depth of 45 feet below low-water mark and filled with concrete. Its two central openings are spanned by the twin parts of the superstructure that swing round the central pier. Each of these openings provides a clear passage of 104 feet. Opened and closed with apparent ease by means of hydraulic power, its movable section is 281 feet long and weighs more than 1,450 tons.

Although it is rarely opened today, the Swing Bridge is still carefully maintained by Port of Tyne. It had its busiest ever year in 1924, being opened more than 6,000 times. By the early 21st century the number of openings had exceeded one quarter of a million. The Swing Bridge also proved a fitting companion to Stephenson’s High Level Bridge of 1850, slightly to the west, which was high enough above the waterline to allow large ships to pass underneath it.