To find out more about Armstrong's extraordinary achievements in engineering and other spheres, attend a talk or debate at Newcastle's Literary and Philosophical Society, the Lit & Phil, or simply visit its famous library. Armstrong was president of the society for 40 years and put up the money for a 700-seat lecture theatre, seen above (but now demolished). Or explore the city and its surroundings on foot by following the Living history trails. 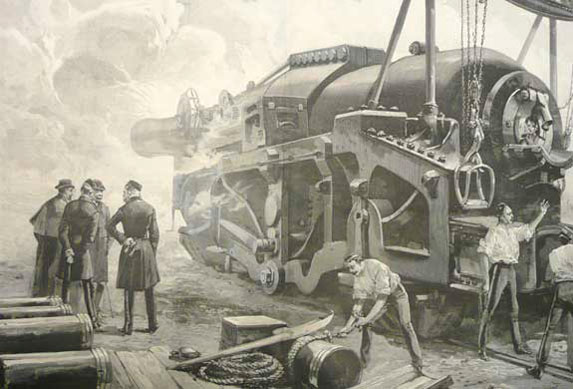 A unique image has been discovered of William Armstrong’s 111-ton ‘monster’ gun. Published on 11 June 1887 in the Illustrated London News, the picture shows the testing of the weapon – then the largest gun in existence – at Woolwich Arsenal in southeast London.

Constructed at the Elswick Works of Sir W. G. Armstrong, Mitchell & Co. of Newcastle upon Tyne, it was designed for arming the most modern warships.

Outclassing the products of Armstrong’s greatest rival, Alfred Krupp of Essen, the monster gun was the main attraction at the Royal Mining, Engineering and Industrial Exhibition, held at Newcastle in 1887 to celebrate the golden jubilee of Queen Victoria’s accession to the throne. In that same year, its creator was raised to the peerage as Baron Armstrong of Cragside, the first engineer to be ennobled.

The picture will be displayed, along with many other related items, in an exhibition at Newcastle’s Discovery Museum to mark the bicentenary of William Armstrong’s birth. The exhibition will run for six months from July 2010.