'Thoroughly researched, finely written and helpfully illustrated . . . essential reading for anyone interested in the power and greatness of Victorian England.’
Len Deighton

'This intimate, authoritative portrait reveals as never before the extraordinary achievements of a multi-faceted Victorian giant.'
David Kynaston

'Magician of the North is that rare combination of very detailed and very readable – fascinating about the development of modern warfare, and even more fascinating about a complex individual.'
Sharon Griffiths,
Northern Echo

For press or publicity queries regarding William Armstrong, Magician of the North, please contact Linda MacFadyen on 0191 280 1080 or at linda@mcnidderandgrace.co.uk

William Armstrong, Magician of the North 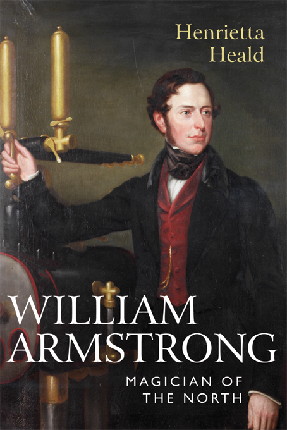 Magician of the North is the gripping, true-life story of a man who has a claim on the title 'inventor of modern living'. Born to a merchant’s clerk and a coal-owner’s daughter in Regency Newcastle upon Tyne, and with little formal education, William Armstrong would rise through the ranks to become – through the magic of science – one of the richest and most influential men in Europe.

Made a Fellow of the Royal Society at the age of 35, Armstrong is Britain’s forgotten genius. He was a visionary inventor, engineer, scientist and businessman who bestrode the 19th-century world like a colossus, bringing global renown to his great Elswick works on the Tyne – and becoming in the process both a national hero and a figure of furious controversy. In its heyday, Elswick employed over 25,000 people in the manufacture of hydraulic machinery, ships and armaments.

Armstrong built Newcastle’s Swing Bridge and the hydraulic mechanism that operates London’s Tower Bridge. Among a host of other remarkable acts, he created Cragside in Northumberland, the first house in the world to be lit by hydroelectricity. He and his wife – environmentalists far in advance of their time – planted in the grounds of Cragside more than seven million trees. Armstrong was knighted in 1859 after presenting his gun patents to the government, and in 1887 he became the first engineer – indeed, the first scientist – to be raised to the peerage.

In this penetrating account of Armstrong’s life, Henrietta Heald explains how the boy whose early love affair with water and passion for invention led to the development of a worldwide commercial network that became a cornerstone of the British Empire. She argues that a mixture of imperial guilt and ambivalence about the military–industrial revolution – coupled with the absence of a reliable heir to Armstrong’s vast wealth – led to his being temporarily airbrushed out of history.