Autumn by William Morris: an example of Cragside's stained glass.

'I can't begin to convey the faintest idea of the pleasure that Cragside has given me,' said Armstrong in the late 1890s, a few years before he died, aged 90. 'I feel certain that, had there been no Cragside, I shouldn't have been speaking to you today – for it's been my very life.'

Find out more about Cragside and how it evolved from Abroad Again in Britain by Jonathan Meades. 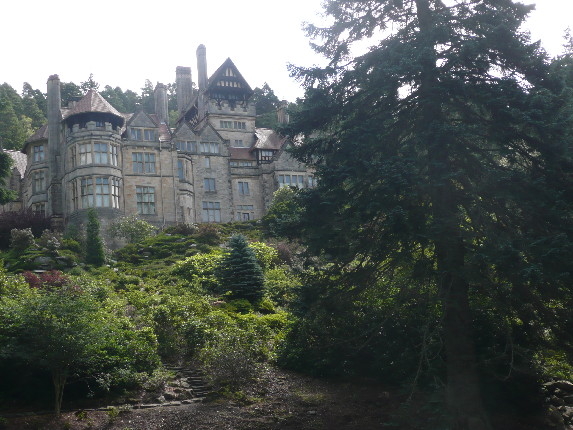 House of wonders amid rocky moorland

Described from the early days as 'the palace of a modern magician', Cragside is the house that William Armstrong built in the late 19th century amid Northumberland moorland near the village of Rothbury. It began life in the mid 1860s as a humble sporting lodge, but everything changed with the arrival on the scene of the visionary architect Richard Norman Shaw.

Originally commissioned to design an extension to Armstrong's banqueting hall in Jesmond Dene, Shaw was invited to Cragside in 1869 and apparently drew up his plans for its development in a single afternoon. In the event, Shaw was involved in Cragside for a period of 15 years, during which the house grew and grew.

The poet John Betjeman, who admitted that he would like to have lived at Cragside, had a theory to explain its genesis. 'First, I think, Armstrong was going to create a castle. And then he decided, or somebody decided, later to add a ballroom, so the castle as you came in was immense, its stone arches . . . and passages never quite ending, leading you on to another corner. And they they decided to go for pleasure and not be such a fortress, so there is the ballroom part in the Renaissance style – most beautifully done, and a fireplace as big as a house in the ballroom with alabaster carving all over it. I've never seen anything like it, never seen anything so big before.'

Even when Shaw had finished his work, the house remained dramatically exposed in its setting. In the opinion of architectural historian Mark Girouard, it must have looked more like a castle than a house: 'It was floating on the top of a craggy hillside, as you can see in the old photographs. Now the trees have grown up all round it, which give it a curious, rather spooky character. It's a kind of magic place.' And this sense of magic was enhanced by all the extraordinary inventions that Armstrong put to work in the house. In December 1880 Cragside became the first house in the world to be lit by hydroelectricity.

Writing in 1881, the architect and painter Thomas Raffles Davison described the indelible impression that Cragside had made on him:

'Imagine a great hill covered from bottom to crest with huge grey boulder stones, and halfway up, cut out of a steppe on the hillside, the site and placing of a building of the most picturesque kind imaginable. Then, having chosen the site and placed the house, call forth your gardeners by the hundreds, and bid them make amongst and around those crags and boulders cunningly winding walks, every one formed of steps of the natural grey stone.

'Then bring your evergreens and rare heathers by the tens of thousands, plant them over and about the place till there is hardly a spot of bare soil left; then with the rarest and commonest ferns plant every crevice among the boulders. Form two artificial lakes in the valley near the house, so that you can defy suspicion of the manufacture. Make a carriage approach from opposite ends of the valley, so easy and pleasant that it might have been transplanted from Hyde Park; and, beside these, let there be rolling along the hill, at two heights above, carriage drives that for views and healthful breezes shall be immaculate. Along the valley let there by a brooklet teeming with fish, and covered and bordered with trees and rocks forming a veritable glen: span the stream by rustic and iron bridges, which form the centres of a score of perfect pictures.

'As for the hall itself, you will not sum it up in words – for beyond its charming rooms, which give an added pleasure and refinement to life, there are in it such stores of art, pictures, sculptures, pottery and books as only a princely and discriminating wealth can bring together.'