Do you agree with Janet Street Porter that Bamburgh Castle and its surroundings deserves to be described as Britain's finest view?

A magnet for film-makers

Recent archaeological finds at Bamburgh Castle have proved the spur for a feature-length documentary film called Castle of Legend, due for release next year.

It is not the first time that a film has been made at Bamburgh. Celebrated directors who have been drawn to the spot include Roman Polanski (Macbeth, 1971), Ken Russell (The Devils, 1971, with Oliver Reed) and Shekhar Kapur (Elizabeth, 1998, with Cate Blanchett and Joseph Fiennes). Becket starring Richard Burton and Peter O'Toole was made at the castle in 1964, and Mary Queen of Scots with Glenda Jackson in 1972. 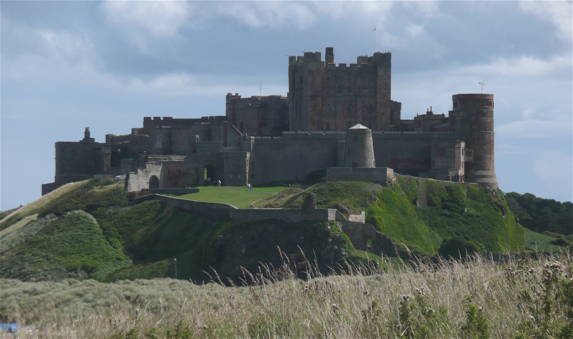 Bamburgh Castle as it appears today, transformed from the ruined state in which Armstrong found it.

A double bicentennial celebration was held at Bamburgh Castle on 10 September in honour of the lives of Admiral Lord Collingwood and Baron Armstrong of Cragside, two great heroes of North-east England, both born in Newcastle upon Tyne. All the proceeds from the event went to the RNLI (Royal National Lifeboat Institution).

Collingwood died in 1810, five years after the Battle of Trafalgar, where he served as Nelson's second-in-command. That same year saw the birth of William Armstrong, who would win worldwide fame for his scientific inventions, becoming the first engineer to be raised to the peerage. Armstrong built Cragside in Northumberland and in later life restored Bamburgh Castle to something approaching its medieval glory.

In the spectacular setting of the King's Hall, Dr Tony Barrow presented 'Collingwood's Northumbrians' and Ken Wilson spoke about the first Lord Armstrong.

Described by the historian Cadwallader Bates as ‘the very cornerstone of England’, Bamburgh Castle was bought by Armstrong in 1894 – in a ruinous state after hundreds of years of neglect. Aided by architect Charles Ferguson, Armstrong embarked on a massive programme of renovations, intending to turn part of the castle into a convalescent home for people who had seen better days – but he did not live to see result, dying in 1900 at the age of 90. The restoration works, which took ten years to complete, were reckoned to have cost more than £1 million.

The castle is still owned by members of the Armstrong family and much of it is let as private apartments, although other areas are open to the public, including the Great Kitchen, the King’s Hall, the Captain’s Lodging and part of the keep, including the Armoury.

Bamburgh Castle can be visited throughout the year and parts of the castle are available for weddings and other celebrations. For information about archaeological digs, see Bamburgh Research Project. For details of the bicentennial celebrations, see Programme of Events.