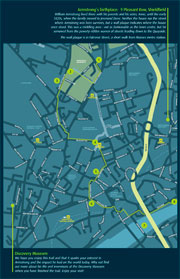 The leaflet can be downloaded as a PDF from here.

2010 marks the bicentenary of William George Armstrong, recognised as one of Britain’s leading scientists and industrialists of the 19th Century.

Born in 1810 in Shieldfield, Newcastle upon Tyne, Armstrong invented the hydraulic crane and the Armstrong Gun. He created Cragside, the first house in the world to be lit by hydroelectricity, and restored Bamburgh Castle on the Northumberland coast. He founded the Elswick Works, which was one of the biggest employers in the country. His influence was felt in places as far away as Russia, Japan and Chile.

Armstrong never forgot the people of Newcastle and through his generosity established many institutions, including the College of Science (now Newcastle University), the Hancock Museum (now  the Great North Museum), and the Royal Victoria Infirmary (RVI).

He also gave Jesmond Dene and Armstrong Bridge to the city. When he died, on 27 December 1900, at the age of 90 – a few weeks before Queen Victoria – The Times said in its obituary: ‘With his death Newcastle loses her greatest citizen and the country at large one of the worthies of the expiring century.’

This walking trail takes in the places which mark key points in the lifetime of Armstrong, his birthplace, Newcastle University, which he founded, as well as the famous Literary and Philosophy Society, a building which stands testament to his early inventions and the impact that Armstrong had on both industrial and scientific discovery.

We hope you enjoy discovering more about the life of this truly influential and enterprising industrialist and inventor.

‘However high we climb in the pursuit of knowledge we shall still see heights above us as yet unscaled, and the more we extend our view, the more conscious we shall be of the immensity which lies beyond.’

W G Armstrong - Presidential address to the  British Association for the Advancement of Science, 1863

William Armstrong lived there with his parents and his sister, Anne, until the early 1820s, when the family moved to Jesmond Dene. Neither the house nor the street where Armstrong was born survives, but a wall plaque indicates where the house once stood. This was a middling area – not as fashionable as the town centre, but far removed from the poverty-ridden warren of streets leading down to the Quayside.

The wall plaque is in Falconar Street, a short walk from Manors metro station.

--
Discovery Museum
We hope you enjoy this trail and that it sparks your interest in Armstrong and the impact he had on the world today. Why not find out more about his life and inventions at the Discovery Museum when you have finished the trail. Enjoy your visit!

The trail begins outside the Great North Museum, known formerly as the Hancock.

The original museum, opened in 1884, was named after the naturalists Albany and John Hancock, who helped Armstrong to shape the pleasure grounds at Jesmond Dene, one of his many gifts to the people of Newcastle. A memorial statue of Armstrong by Hamo Thornycroft stands in front of the museum, now reincarnated as the Great North. On either side are bronze plaques illustrating Armstrong the inventor and industrialist. To the left, a hydraulic crane is lowering a gun onto a battleship. To the right, a ship is being towed by tugs through the open arm of the Swing Bridge.

Unveiling the Armstrong statue outside the Hancock Museum in 1906. 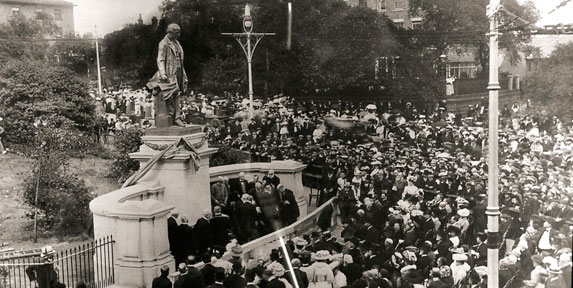 Walk past the new university buildings and turn right through the main quadrangle.

The Armstrong Building, at the heart of Newcastle University, was named after the man who laid its foundation stone in 1887. It was built to house the growing College of Science, founded by Armstrong and others in 1871 to train scientists, engineers, and mine managers. The College of Science, which from its inception had been part of Durham University, was renamed Armstrong College in 1906 in honour of its major patron, six years after Armstrong’s death. In 1963 it became Newcastle University.

Walk south along Queen Victoria Road to the front of the old RVI Victoria Wing.

By the late nineteenth century, the old Newcastle infirmary, located behind the Central Station, could no longer meet the needs of the growing metropolis. In 1897, when Victoria had been Queen for 60 years, Armstrong and others launched a Jubilee Fund to finance the building of a new hospital, which has been much redeveloped in recent years. Through his heir and great-nephew, William Watson-Armstrong, Armstrong donated £100,000 (£5.75 million in today’s money). A statue of the Queen by George Frampton stands outside the old Victoria Wing. 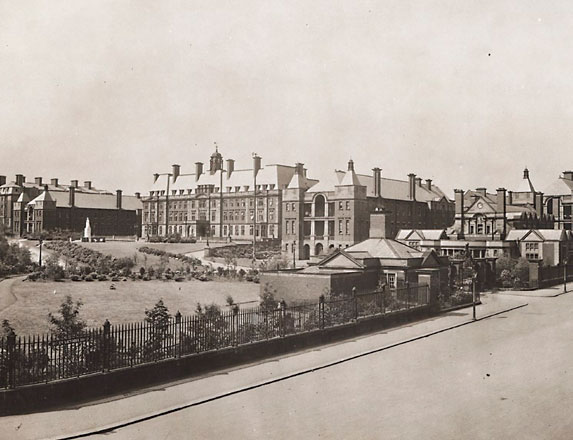 The Royal Victoria Infirmary in 1910

Armstrong’s employment as a lawyer in the 1830s coincided with the transformation of central Newcastle by the builder Richard Grainger, whose name is immortalised in the area known as Grainger Town. Grey’s Monument is dedicated to Earl Grey, the Liberal Prime Minister who oversaw the passage of the Great Reform Act of 1832; it was unveiled in 1838, the year of Victoria’s coronation. When Armstrong set up the Elswick Works in 1847, his first office was at 10 Hood Street, off Grey Street, opposite the Central Arcade. 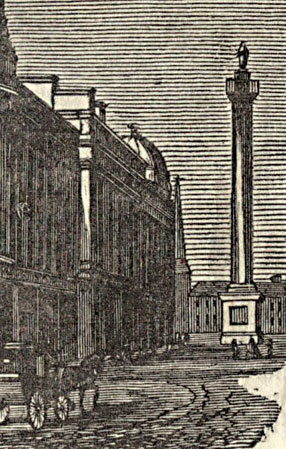 Grey’s Monument at the top of Grey Street

Although Armstrong trained and worked for several years as a lawyer, his heart and head were not in it. His passion – which his father tried to discourage – was for mechanics. Whenever he could, he visited the engineering works of Henry Watson in High Bridge, where he saw clocks and telescopes being made, and was allowed to try out his own inventions. Armstrong’s first hydraulic cranes were manufactured at Watson’s works, and he later employed some of Watson’s men at Elswick. The factory has taken on a new existence as an arts centre. 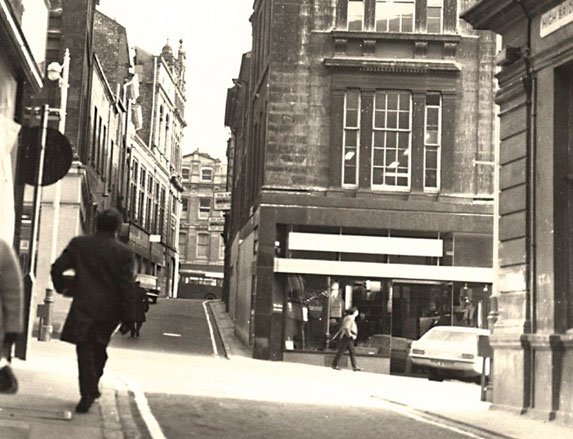 High Bridge Street in the 1960s


Literary and Philosophical Society
(Lit & Phil)
Walk along High Bridge to Groat Market. Follow Pudding Chare ahead to Westgate Road. Cross over Westgate Road and turn left, away from the railway station.

Founded in 1793, the Lit & Phil was hugely influential in the intellectual development of Newcastle. Armstrong was president of the society from 1860 to 1900 and financed the building of a 700-seat lecture theatre. In lectures to the society he demonstrated his early inventions, such as the hydraulic crane and a ‘hydroelectric machine’ for which he was made a Fellow of the Royal Society at the age of 35. The Lit & Phil houses the largest independent library outside London, open to all. 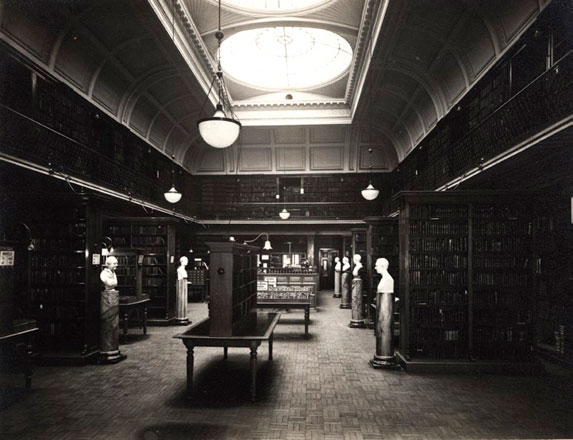 High Bridge Street in the 1960s

Continue along Westgate Road to Castle Keep and walk down steps to Sandhill.

When Armstrong ventured into shipbuilding in the late 1860s, all the vessels were constructed at Charles Mitchell’s Low Walker yard, east of Newcastle. But in 1876 he built a Swing Bridge to replace a low-arched stone bridge across the Tyne, allowing big ships to pass upriver beyond Newcastle. This made possible the creation of a shipyard at Elswick, 12 miles from the sea. The original machinery is still used to operate the bridge although the hydraulic opening mechanism was later replaced by an electrical device. 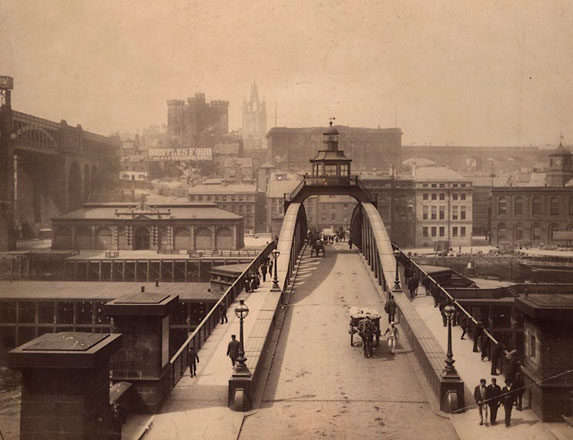 Walk along the Quayside to the Millennium Bridge, where this trail ends.

From the late 1840s, the Newcastle Quayside was lined with Armstrong’s hydraulic cranes – the invention of which had dramatically speeded up the loading and unloading of ships. While fishing in the Pennines, and observing the inefficient action of a traditional mill-wheel, Armstrong had come up with the idea of using hydraulic power to drive machinery, and later set up a factory to put his plan into practice. The cranes were a huge success, being adopted not only in Britain but throughout the world. While little remains today of the ships and cranes, a series of public sculptures recall Tyneside’s glorious maritime past. 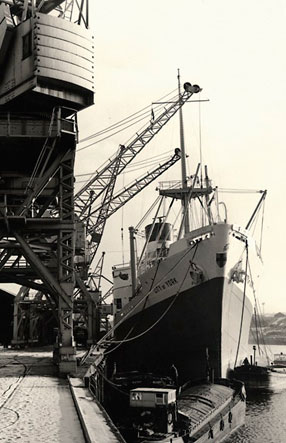 Cranes on the Quayside in 1967