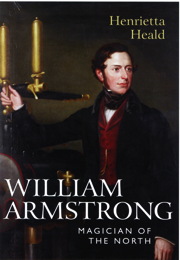 The first major biography of William Armstrong of Cragside, published by Northumbria Press, is now available online and from all good bookshops. 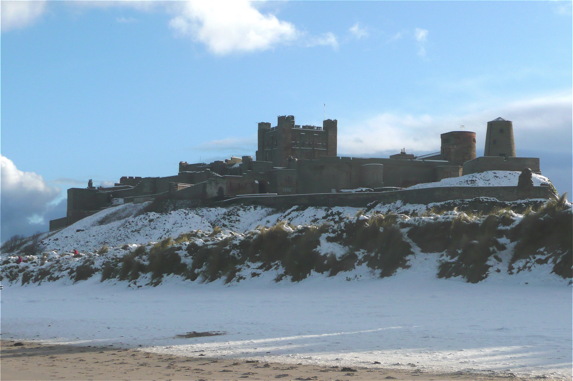 Bamburgh Castle was one of the many places in Northumberland shrouded in snow during the bicentenary weekend.

Heavy snowfall and sub-zero temperatures across much of north-east England and southern Scotland caused the cancellation of several events planned to celebrate the bicentenary of William Armstrong, who was born on 26 November 1810 in Shieldfield, a village outside Newcastle upon Tyne. The son of a corn merchant and a coal-owner's daughter, and largely self-educated, Armstrong went on to become one of the most famous scientists and engineers of the 19th century, bringing global renown to his Elswick Works on the Tyne.

In particular, the grand finale of the light festival at Cragside, planned over many months by the talented team at Northumberland Lights, had to be called off at the last minute.

Armstrong's experiments with electricity provided the inspiration for the festivities. For the first half of November, part of the Cragside grounds were transformed into The Electric Estate. Renewable power sources were installed in woodland around the estate to create, in the words of Cragside's manager, John O'Brien, 'magical illuminated evening walks, offering a unique family experience'. Prominent among the illuminations was the Cragside Crackle, a metal sculpture by Graham Gillman, which seems to float on Tumbleton Lake.

A commemorative event at Bamburgh Castle, which Armstrong acquired and restored in the last few years of his life, was also disrupted by the exceptionally bad weather, but a full peal of bells at St Aidan's Church in Bamburgh village went ahead as planned. This was followed by a carol service and the switching-on of the Christmas lights. Full peals were also rung over the weekend at Rothbury and Elswick.

Another event that survived the bad weather was the unveiling of a plaque celebrating Lord Armstrong's life by the Lord Mayor of Newcastle, Councillor Brenda Hindmarsh. The plaque was installed at 41–51 High Bridge, in Newcastle city centre, the site of Henry Watson's Works, where William Armstrong built his first water-powered rotary engine in 1838.

For the story leading up to the Cragside festivities, see Accent magazine and pages 12–13 of the November edition of Culture, the magazine of the Newcastle Journal.